Unlike with undecorated drawings, I don't save step-by-step images of painted drawings. However, I do save the steps involved in matching the colours and creating the logos and lettering that are used in them.

In the past, I matched paint colours by eye. However, starting with the 1:18 series, I match the colours directly with photos. I take a 16 x 16 pixel sample from 5 to 10 properly exposed photos showing clean, unfaded paint, and determine the combined average RGB values of all the samples. I then increase the saturation very slightly and adjust the luminosity (slightly lower for dark colours and slightly higher for lighter colours) to account for dust or glare. If I find a very good online paint sample, I give extra weight to the RGB values of that sample. The colours I use in the 1:18 drawings are listed in the Colours page.

The image below shows colour matching for the CSXT YN2 paint scheme, based on samples from eight photos. The RGB values in brackets indicate the sample average, while the second set represents the final colour I choose to use. 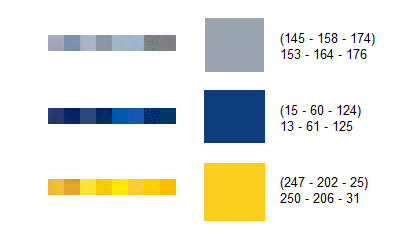 The results of all the font-matching and tracing that I've done are posted in the Lettering and Logos section.

While older lettering and numbering tended to be created by railroad draftsmen (and thus has no equivalent matching font) a lot of more recent lettering is either a close match or directly derived from modern fonts. I only use an existing font when I can find a very close match - otherwise, I modify a font or trace the shapes manually. In the past few years I've started using online font-matching tools to find fonts that I might not already have.

Below is a sample of font-matching - and what I would do if each font were the closest match I could find. I don't attempt to make such exact matches with lettering smaller than 3" or 4" - partly because the fonts don't always scale perfectly at smaller point sizes, and partly because neither the reference photos nor my drawings are large enough to show such small differences at that size.

If I can't find a matching font, I trace from the best source I can find. In several cases, I've found painting or lettering stencils for various railroads in archives or galleries; for instance, my renditions of the NW lettering and logos are based on the sample images posted online at the Norfolk & Western Historical Society. In some cases (usually for more modern paint schemes) I've also found the original logo online, in which case I simply adapt it to work in the drawings - although I always need to check that it matches the actual paint scheme because a lot of online samples are merely approximations. For a few logos, I've followed the original geometric specifications, such as the CN "noodle" which is based on a 40 x 15 square grid.

In the absence of any available "official" sources, I trace from photos. It's relatively rare that I find photos that are perfectly straight and perpendicular, so I use the "Perspective" tool in GIMP to make the hood or cab rectangular, then adjust the width and height to the correct proportions. I generally try to make the trace at least twice the size of what's used in the 1:18 drawings so that the edges become sufficiently anti-aliased when scaled.

I usually trace using a combination of arcs and straight lines, rather than simply drawing along the outline of the characters. I also ensure that serifs, shapes and line widths shared across different characters are consistent. If possible, I compare the result against several images to ensure that I haven't incorporated a one-off error.

Below is an example of tracing the numbers used in the Western Pacific dark green and orange paint scheme. For display purposes this image is downsized; the original trace is twice as large, or three times the size of the numbers as they appear in the 1:18 drawings. Up to the 1:18 series, I didn't generally save the steps or reference images when making the logos, which made it harder to revise or upscale them later, but I now keep an archive of reference images and tracing steps.

The photos were the largest and clearest renditions I could find after a (relatively brief) online search, and mostly came from Flickr. All were 3/4 front views, so I had to adjust the perspective and proportions based on the locomotive cab edges and roofline. I also rotated some numbers that were slightly crooked. In the case of the "8", I traced both sides separately and then did a second trace of the average to make it symmetrical.

In this case, the individual numbers had very few parts in common; some other railroads use a shared rectangular shape for all the characters. While the circles in the trace are a "best guess" based on slightly fuzzy photo edges and don't necessarily match what might be specified in the original stencil, the end result is close enough for my purposes.

Next up: Hardware and Software