Since I edit all the drawings directly as raster images, the drawings are all scaled based on a pixel-per-inch ratio, rather than being scaled to a particular print size: 16.2 pixels per scale foot for 1:55 drawings (a result of them being resized from smaller drawings) and exactly 24 and 48 pixels per foot for the 1:36 and 1:18 scales, respectively.

I save all the steps I take in making the drawings, and I intentionally keep layers of components separate in case I need to isolate them again later. For most locomotives, I start first with the trucks and major dimensions. I mark off straight lines denoting edges such as the pilot faces, underframe height (top and bottom), cab roof height, axle center lines and coupler pulling faces (which are about 3.5 inches inboard of the outside edge of the coupler knuckle). Even for models that share many components, I often start with these basic lines before copying over shared parts.

While it's not uncommon for me to tweak dimensions and details as the drawings progress, in the case of the first steps of the MLW M-636 below, I had many direct measurements to work from and therefore retained most of the same proportions in the final drawing.

Once I have the main dimensions established, I move to the hood. This is often the fastest and most rewarding part of the drawing, as hood doors and intakes follow regular patterns and are clearly visible in photos. In the M-636 image above I already had half of the hood completed by the time I saved the file as a second step.

Since the trucks are often shared among many models, I draw them in separate images. I draw most trucks using two main layers - one for the wheels and traction motors, and one for the truck frame and brakes - but in the case of the HTCR-4 truck below, I added a third layer for the radial-steering links. After combining the layers I added outside details such as the brake lines and cylinders.

Usually the last part to be completed is the underframe: cables, pipes, brake chains and fuel fittings. This is the most tedious part of the drawings, and I often end up with a half-dozen 70% complete drawings at any one time, all waiting for underframe detail. I use contrasting colours as a form of layering in images that are otherwise a single layer. In the case of the Dash 9-44CW below, the drawing was derived from earlier ES44DC drawings and therefore had fewer steps than many other models; this was the fourth and final step before the completed drawing.

The P42DC drawing below illustrates some of the steps I took in adapting the VIA Rail version (which was already complete) to make an Amtrak variation. I often use small crops from photos to place components, such as with the air dryer and rear hood details, and this step also included a direct photo trace of the sand line brackets. The air dryer and filters themselves were taken from a separate collection of air brake components that I use across all the drawings. I also included photo crops for a couple of details that are absent in the final P42DC drawing but kept as reference for related models, such as the lights above the cab windows (for the P40DC) and rear hostler window (for the P32AC-DM).

For freight cars, I first draw all the components that are the same on both sides, then save two copies to draw the remaining details of both sides in parallel. Since the most cluttered corner for details is the bottom right of the B-end (where there's both the hand brake and uncoupling lever) I often draw the handbrake on the left-side view and the uncoupling lever on the right-side view before combining them in the final drawing.

In the case of the Gunderson 6269 cu-ft boxcar drawing below, I used photo crops to locate the side posts and frame huck bolts, scaled based on the door and truck bolster centerlines. This was the first saved step; I saved one more step of each side with all the underframe details.

While much of my photo-tracing involves lettering and logos for painted drawings, I do trace some components in the undecorated drawings - most commonly trucks or other irregular shapes. Here is an example that is typical of most freight car trucks, in this case a 70-ton Barber S-2 truck cast by National. 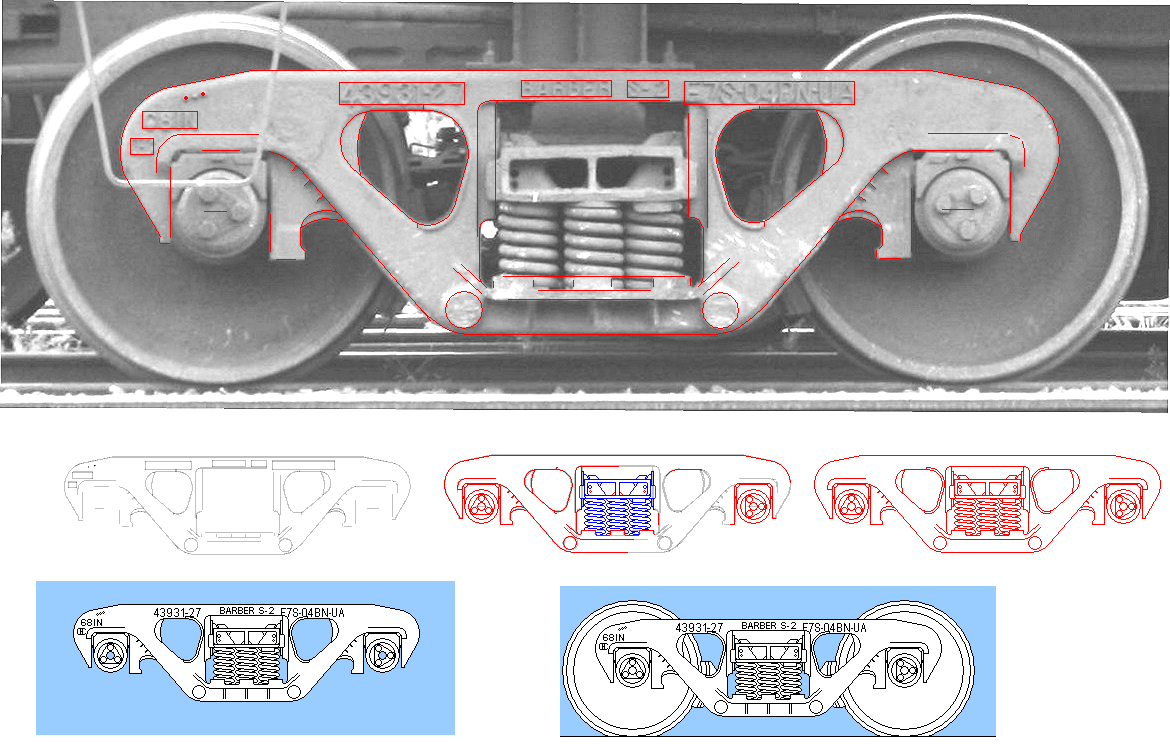 The initial trace (top) is much larger than the final drawing. After isolating and downsizing the trace (middle left), I mirrored it and re-traced the average of the two sides to make it symmetrical. This process significantly reduced the precision required in the original trace, which is mostly just a series of short line segments. I use the same wheels, axles and springs (along with their relative location) across trucks from different foundries.

For many smaller components (and even for several other truck types) I've simply traced a rescaled photo that was already downsized to 1:18.

Unless extra height is needed, all my drawings are the same height, and all drawings of a particular locomotive series have the locomotive in exactly the same place within the image. I do this for a specific reason: Revisions.

When a bunch of drawings all require the same revisions, I can modify them very quickly by simply copying a template with the revised details into the drawing. With all the drawings positioned the same way, I don't have to worry about manually lining the details up. The affected details are surrounded by a transparent area. By using templates, I can preserve all the railroad-specific details in the drawings - unless they overlap with the details being changed, in which case it takes a bit more work.

Once I copy the template into the drawing, I make sure that no other details have been incorrectly affected by it. I then add the revision date into the image - using another template. I generally keep a one-week "debugging" period for new drawings during which I don't mark the date of revisions (since I often make many revisions during the initial days after a drawing has been completed).

One of the biggest cases of template revisions came in early 2019, when I started making minor changes to the hood proportions of EMD GP30 through SD60 drawings - which accounted for some 900 drawings. Thanks to the use of templates, within only the first two days of revisions I was able to update almost 400 drawings.

Here is one of the templates I used to update GP40 drawings when I revised the hood proportions. This template applied to earlier GP40's with dynamic brakes and chickenwire intakes; I had a few other templates for other phases and variations. In this case, because so much of the hood was revised, a larger proportion of the drawing was retained than in most other templates I've used.

Next up: Painted Drawings