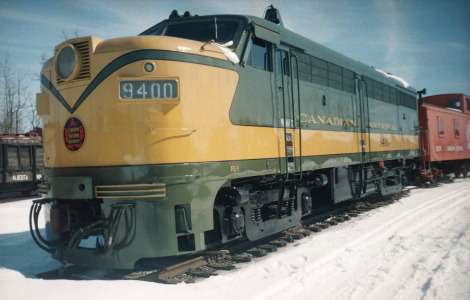 The FA-1 was introduced in 1946 by ALCO, in partnership with General Electric. Designed for freight service, it rode on 4-wheel Type B trucks and was powered by a 1,500-horsepower, 12-cylinder 244 engine contained within a truss-frame carbody. A cabless "booster" model (the FB-1) was also produced. In 1950, the FA-1 was replaced by the updated FA-2, for which a passenger version (the FPA-2) was also available. Production of the FA-2 ended in 1956.

Canadian versions of the FA-1 and FA-2, built by MLW, were substantially similar to their ALCO counterparts. In 1958, MLW introduced the FPA-4 (an FPA-2 with a 251-series engine and a few other mechanical upgrades) which was purchased solely by Canadian National.

Compared to other cab units of the era, the FA was visually distinguished by relatively square front styling, with a vertical and nearly flat-topped "nose". The busy appearance of ALCO's earlier cab units (with multiple portholes and roof vents) was replaced with clean, largely horizontal lines. The upper sides of the carbody had a continuous grill interrupted by radiator shutters near the rear, above which was a single large radiator fan. A single exhaust stack was located in front of the radiator fan; it was offset and lengthwise with the initial air-cooled turbocharger, and centered and crosswise with the later water-cooled turbo.

All variations had a side carbody door centered in the middle of the carbody, with A units having the cab side door above the front truck. Dynamic brakes (when present) were identifiable by a long, slightly raised housing on the front half of the roof.

As the 244 engine had been rushed into production, early FA units had a high rate of engine failure. Problems with crankshafts in the earliest FA-1 units, along with other engine-related issues (such as block welds), led to many engine block replacements in earlier units, and several further changes to the engine were made during later production. The original GE air-cooled turbocharger was replaced with an ALCO-designed water-cooled turbocharger on the vast majority of units. Once initial teething issues were overcome the units generally provided decent service, with some remaining in use up to the late 1960s.

The MLW FPA-4 and FPB-4 used by CN (and later by VIA Rail) enjoyed a significantly longer service life than most earlier models. As the 251-series engine had better reliability and parts availability than the 244, these units remained in service up to 1989, and were only retired when they didn't meet new requirements for an electronic Reset Safety Control (RSC) system on lead locomotives in Canada. Today the FPA-4 and FPB-4 account for roughly half of all preserved FA-series locomotives.

The FA-1 and FB-1 were distinguished from later units (and from the longer PA-1) by their relatively short length, and by the radiator shutters and fan located at the very end of the carbody. They were intended for freight use and thus did not have room inside the carbody for water tanks or a steam generator for passenger service. The underframe between the trucks contained the fuel tank, flanked by the air reservoirs and battery boxes.

The first few units (ALCO demonstrators as well as early GM&O production) had the headlight mounted below the seam on the nose, and had a curved trim piece behind the side cab windows. The ALCO demonstrators also had horizontal side grills and fairings over the fuel tank and air reservoirs, similar to those used on the PA. All later units abandoned the curved side trim and used a thinner wire grid for the side grills, and moved the headlight to the top of the nose. The batten strip above the side grills was about 6.5" wide and was held in place by two rows of screws along its entire length.

There were no major changes during production, but there were a few minor variations:

Illustration of a typical ALCO FA-1.

The FA-2 was introduced in 1950. Horsepower was increased from 1,500 to 1,600, but the model also received a larger carbody and redesigned component layout to allow room for a steam generator, making the FA-2 suitable for both freight and passenger service.

Compared to the FA-1, the overall length was increased by 2 feet, and the radiators were shortened and moved forward to leave an additional 5 to 6 feet of space at the rear of the carbody. To make room for water tanks between the trucks, the battery boxes were moved to a compartment under the cab (visible in the addition of louvered access panels ahead of the cab steps) and the air reservoirs were moved to the inside rear of the carbody. An air cooling manifold (an extension of the pipe between the air compressor and air reservoirs) was placed on the outside back wall of the carbody.

Passenger versions of the FA-2 were known as the FPA-2, and contained a steam generator at the rear of the carbody and a combination fuel/water tank that took up all available space between the trucks. However, the majority of production consisted of the freight-only FA-2, and the relatively small crosswise fuel tank left several feet of empty space between the trucks.

Several other more minor changes from the FA-1 were made as well. FA-2's were built with angled numberboards in a simplified rectangular housing, as opposed to either side-mounted numberboards or a more rounded angled housing used on the FA-1. The bottom of the underframe and carbody were raised by 1" compared to the FA-1, bringing the height in line with the PA series. The batten strip above the side grills was narrowed and held in place by a single row of screws. The draft gear carrier, which on the FA-1 and PA series was a separate housing bolted in place, was welded as an integral part of the underframe on the FA-2.

As with the FA-1, some models were built with higher-clearance side sheets on the pilots. A number of A-units were also equipped with hinged front coupler shrouds, which in general were promptly removed. Later versions usually had several plugs along the bottom edge of the fuel tank. Multi-chime air horns were just being introduced as the FA-2 entered production, and some variations were so-equipped from the factory.

Illustration of a typical ALCO FA-2 (Phase 1a). 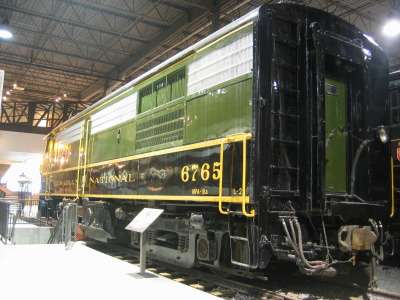 Externally, the FPA-4 was substantially similar to the late ALCO FA-2, and even more similar to the MLW FPA-2's that immediately preceded it on the CN roster. The most obvious difference was the additional air intake under the radiator shutters, which were added after the air cooling pipe manifold was moved from the outside back wall to inside the carbody.

Although the 251-series engine in the FPA-4 was longer than the 244 engine used in earlier models, the carbody and roof hatch dimensions remained the same. The fuel and water tanks on the FPA-4 were unique compared to other ALCO FA units (although some CN FPA-2 units were rebuilt with similar tanks) and the coupler pockets and draft gear differed from those used in earlier production.

As built, the FPA-4 (along with earlier MLW FA unit production) had a few modifications to deal with Canadian winters. A winterization hatch was located over the front of the radiator fan, which could be set to direct warm air back into the engine compartment. The bell was located on the cab roof instead of in the underframe behind the front coupler.

ALCO diagrams have occasionally led to misunderstandings about the locomotive length, as they list both the length between the coupler pulling faces (the standard measure) as well as the length over the outside edge of the coupler knuckles. However, most FA and PA production followed the same dimensions.

In all cases, the overhang on the A units was larger at the front than the rear, meaning that B units (which used the rear overhang at both ends) had the same truck centers and carbody dimensions but a shorter overal length.

Below are dimensions for FA models as well as for the related PA and PB models.

The FPA-4 was the first ALCO/MLW cab unit I drew in 1:18, and my drawings are based on a combination of measurements I made of CN #6765 preserved at Exporail as well as ALCO FA-2 mechanical diagrams.

The center side door, sand hatches and fuel / water tanks are centered between the trucks, and the inner truss structure is also symmetrical between the truck centers. The exact location of the side seam screws varies slightly between units, although the 4" spacing is consistent. Most dimensions are the same between the two sides; the left side is illustrated as that was the side that was accessible for measuring on CN #6765.

The drawing illustrates the general appearance of FPA-4's after modifications by CN and VIA, but with the steam lines still intact. Among components with dimensions listed, the front fuel filler, the ladder on the end of the carbody, and the large circular panel on the water tank were absent on the units as-built.

B units were 10" shorter (52' 8") with the length removed between the front coupler and truck, making them symmetrical front-to-back. Two steam generators were located at the front (rather than a single one at the rear); the rooftop hatch over the steam generators was approx. 3" longer than on A units (approx. 75" instead of 72") and was located farther inboard from the end of the carbody. Most of the dimensions and hood components from the front truck rearward were the same between the FPA-4 and FPB-4.

In addition to the ALCO mechanical drawings listed, I used a number of other drawings of separate components to make my own drawings.