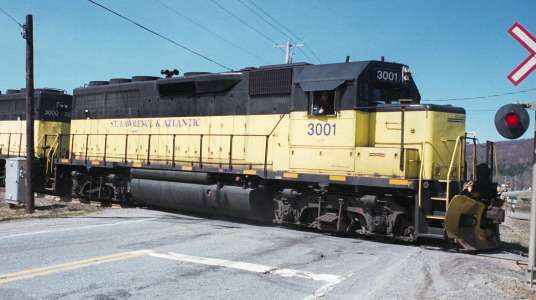 SLR (LLPX) #3001, a Phase 2b GP40 originally built as BO 3702, seen in April 2006. A few minor details have been modified since its initial construction, including the addition of a plow and ditch lights, revised nose grabirons and battery box louvers, and a relocated horn.

The GP40 was introduced in 1966 as an evolution of the GP35. Along with the GP38 and similar SD-series units, it marked the introduction of EMD's 645-series engine, which used the same engine block dimensions as the 567 series but incorporated modified power assemblies with a larger cylinder bore. In the GP40, a 16-cylinder turbocharged version of the engine produced 3,000 horsepower, and was paired with an alternator-rectifier electrical system. This addressed one of the biggest reliability concerns of the GP35, in which the DC generator required sixteen stages of transition to handle a 2,500 horsepower output. The GP38 was a 16-cylinder, non-turbocharged (Roots-blown) model that produced 2,000 horsepower, initially using a DC generator and later (in the GP38AC) using the same AR10 alternator as the GP40. The GP39, introduced a couple of years after the other two, used a turbocharged 12-cylinder engine producing 2,300 horsepower.

Many GP38's and GP38AC's remained in service with their original owners (or successors) well into the 21st Century. GP40's in their original form started to disappear from Class-1 railroads in the 1990's, but many were rebuilt or continued in service on smaller railroads. A fairly large number of GP38's and GP40's have received upgraded Dash-2 (modular) or Dash-3 (microprocessor) electrical systems, and a number of GP40's have been converted to GP38 variations by the replacement of the turbocharger with a Roots blower.

The increase from 2,500 to 3,000 horsepower necessitated a larger radiator section with three 48" fans in place of the one 36" and two 48" fans on the GP35. The GP40 adopted general hood dimensions and radiator design of the last two SD40X demonstrators, which were based on the SD35; this increased the overall length from 56' 2" to 59' 2". The rear truck was moved 1' inward from the rear pilot face, making it symmetrical with the front truck and resulting in 34' truck centers (compared to 32' on the GP35). The longer frame allowed for a longer fuel tank, which increased in capacity to 3,600 gallons, although smaller sizes were also used. The walkway side frame was 5" tall above the air reservoirs, compared to 3" on the late GP35 (or 7" on the early GP35) and air piping was relocated inboard of the air reservoirs (rather than on the outside).

On the hood, the dynamic brake fan and intakes were moved rearward, and the taper of the dynamic brake hatch was made steeper at the rear than the front. Aside from this and the longer radiator section, the cab and hood were otherwise the same between the late GP35 and early GP40. As on the GP28 (the non-turbocharged version of the GP35), the GP38 used the same hood design as the GP40, but incorporated shorter radiator intakes with only two 48" fans and two exhaust stacks in place of a single turbocharger stack.

These phases are based directly on the GP38, GP39 and GP40 rosters compiled by David Thompson, with additional details from my own observations.

These drawings illustrate typical GP40's built to similar BO/CO specs. Although these units are fairly generic, the Phase 2b1 and 2c versions have a few railroad-specific details, such as rock deflector pilots (in place of the later-style footboards on the Phase 2c unit) and a high-mounted bell.