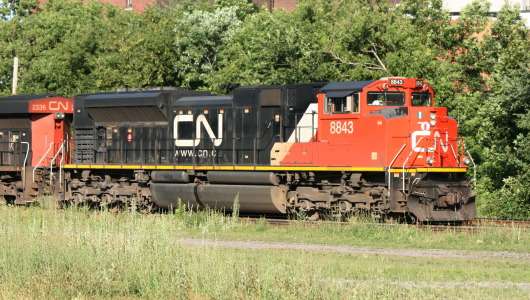 The SD70M-2 and SD70ACe were a redesign of the EMD SD70 series aimed at meeting new emissions standards that took effect in 2005. While they shared many mechanical components with the previous SD70M and SD70MAC models, they received a substantially altered carbody and underframe that borrowed some features previously used in the SD80MAC and SD90MAC series. The air reservoirs and associated piping were all moved to the engineer's side while the traction motor cables were moved to the conductor's side, as on contemporary GE units. The dynamic brakes were moved from the front to the rear of the hood, and a wider radiator section was located behind a lowered and tapered central hood. The underframe was several inches taller than on earlier SD70 models and resulted in a shorter cab being adopted from the late-model SD90MAC. The radial-steering HTCR trucks used on previous SD70 models were updated (denoted "HTCR-4") and a simpler HTSC truck was introduced that lacked radial steering and rode on a shorter wheelbase.

Unlike the SD70M and SD70MAC (which rode on different underframes) the SD70M-2 and SD70ACe were nearly identical. The main differences were the substantially thicker and more numerous DC traction motor cables, smaller traction motors and absence of inverter cabinet vents on the SD70M-2. Visual changes over the production run were numerous but relatively minor, and as the SD70ACe outsold the SD70M-2 by a wide margin, the latter had fewer variations.

These phases are of my own making. As there was no single major change during SD70ACe production after 2005, Phase 1 denotes pre-production units. These phases do not include EMD's new Tier-4 version of the SD70ACe.