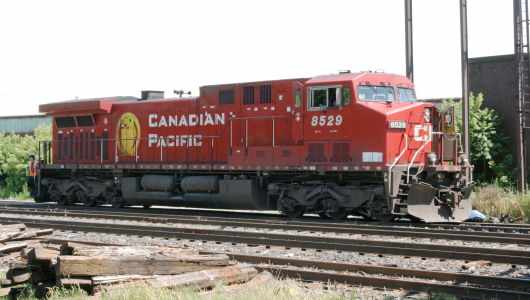 The GE AC4400CW was introduced in 1993 alongside the similar Dash 9-44CW. It marked GE's foray into AC-powered mainline freight locomotives, closely following EMD's successful SD70MAC and eventually outselling it.

The Dash 9-44CW and AC4400CW carried over the general hood and cab styling established with the Dash 8-40CW. Much of the hood and cab remained the same, but the overall length was increased from 70' 8" to 73' 2". The AC4400CW can be told from the Dash 9-44CW chiefly by the large inverter cabinet on the left side behind the cab, together with a longer dynamic brake hood section and a shorter central air intake. Smaller distinctions include the thinner AC traction motor cables, larger traction motors suspended by "dogbone" hangers (in place of supports on the truck frame) and marginally shorter overall hood height over the central air intake.

Both models initially rode on GE's newly introduced high-adhesion 6-wheel truck, which was derived from the high-adhesion design used by MLW on the M-630 and M-636 some 25 years earlier. Compared to the MLW version, GE's design used a longer wheelbase and taller primary springs, but retained the bolsterless rubber pad secondary suspension. The high-adhesion truck differed from GE's earlier "floating-bolster" (FB-3) design in the absence of the bolster and in having all the traction motors oriented in the same direction.

Partway through production, a self-steering truck design was made available for the AC4400CW. The design was more complex than EMD's radial truck (which was used on all SD70M and SD70MAC production) and not all railroads adopted it. CP and CSXT were significant users, while BNSF and UP were not.

While the only major change in appearance was a redesigned inverter cabinet (Phase 2a below) the AC4400CW received a large number of smaller modifications over its production run. Production of the AC4400CW for American railroads ended in December 2004, after which it was replaced by the ES44AC in order to meet Tier II emissions standards. A few orders of the AC4400CW were made in subsequent years by QCM and QNSL in Canada.

These phases are of my own making. Many of the details come from earlier research I did in establishing production variations for the NS Dash 9-40CW. (See Dash 9 Series phases.)

Phase 1d through 1f all occurred within a very short time frame, with each phase representing only a few railroad orders and some orders (such as UP 6550-6699) spanning up to three phases. There was a bit of overlap or inconsistency in some of the details (as noted) but I felt the small number of units representing phase 1d through 1f did not warrant further subphases.

These drawings illustrate typical early (Phase 1a1) and late (Phase 2c) AC4400CW's built to UP specs.