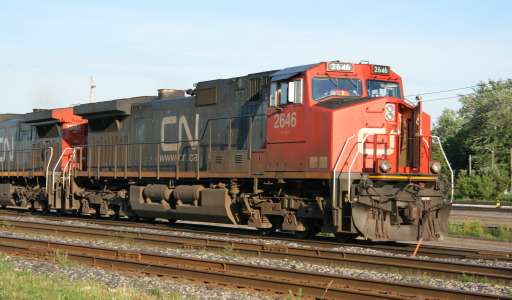 The Dash 9-44CW was introduced in 1993 as a substantial evolution of the previous Dash 8-40CW. The most significant mechanical change from the Dash 8 series was the introduction of the new high-adhesion 6-wheel truck. Much of the hood and cab remained the same, but as a result of the longer trucks, the overall length was increased from 70' 8" to 73' 2". The new truck design also required less vertical clearance, allowing for a significantly deeper underframe. The deck height was increased by 1" to 5' 11", and the standard wheel size was upped from 40" to 42".

The high-adhesion truck differed from GE's earlier "floating-bolster" (FB-3) design by the absence of the bolster and in having all the traction motors oriented in the same direction. In place of a bolster, the truck was centered using a traction pin extending down from the bottom of the underframe, and the secondary suspension consisted of four stacks of rubber pads connected directly between the truck and locomotive underframe. The truck was derived from the high-adhesion design used by MLW on the M-630 and M-636 some 25 years earlier; GE retained secondary suspension of the MLW design almost as-is, but extended the wheelbase and incorporated taller primary springs.

Several other cosmetic changes were made compared to the Dash 8 series. The radiator section was carried over from late Dash 8 units built with split cooling (which had thicker "wing" edges than earlier Dash 8 units) but the intakes and doors under the radiators were redesigned. The hood was lengthened around the central air intake, but the intake itself was shorter. The fuel tank received an extra bevel along the bottom edge, and the corner steps were altered to use a perpendicular (rather than angled) inner edge.

The Dash 9 series was produced alongside the very similar AC-powered AC4400CW. The most obvious visible difference between the two models was the large inverter cabinet on the left behind the cab, present on the AC4400CW but absent on the Dash 9 series. Most Dash 9 units placed the air conditioner in this location instead, as on the Dash 8-40CW. The Dash 9 also used a shorter dynamic brake hood section and a longer central air intake than the AC4400CW. More subtle differences included thicker DC traction motor cables, smaller traction motors suspended from extensions of the truck frame (instead of "dogbone" hangers on the AC4400CW) and marginally taller overall hood height above the central air intake.

These phases are of my own making. Many of the details come from earlier research I did in establishing production variations specific to Norfolk Southern Dash 9-40CW's, which are listed in a separate table below. I elected to group Phases 2c1 and 2c2 as two sub-phases since they each represent a small number of units, a few of which have inconsistent details.

The Dash 9 series underwent fewer changes than the AC4400CW, which received a gradual series of changes specific to the inverters and AC traction system. Additionally, the many changes that define Phase 2a Dash 9 production were staggered in AC4400CW production throughout 1995. (See AC4400CW phases.) 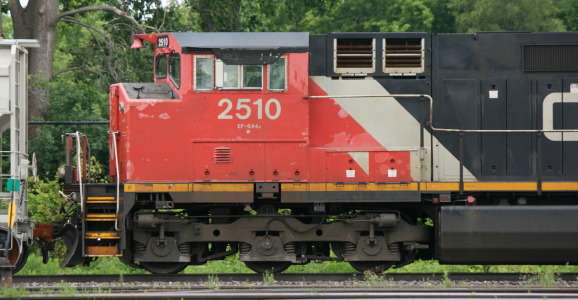 A detail photo showing the 4-window cab used on the Dash 9-44CWL. The curved fuel tank support is just visible in the underframe behind the front truck.

BCOL and CN ordered Dash 9 units with several unique spotting features. The first order on each railroad (BCOL 4641-4644 and CN 2500-2522) were designated Dash 9-44CWL and used a variation of the CN-designed wide-nosed cab, with four windshield panes (the same cab as on the earlier Dash 8-40CM). Compared to the four-window cab used on GMD units, the GE version reduced the length of the short hood and used a shallower angle for the front taper.

These units also rode on a unique underframe that lowered the walkway height from about 71" to 67.5". The fuel tank was welded with curved braces as an integral part of the underframe, rather than suspended separately as on other early Dash 9 units. (Standard Dash 9 units starting in Phase 2a had the fuel tank welded to the underframe in a slightly different manner). Although the frame was the same length as on a standard Dash 9 unit (69' 4" over the end plates), revised couplers (either modified draft gear or longer coupler shanks) increased the overall length from 73' 2" to 73' 8".

Subsequent orders of BCOL and CN units reverted to a variation of GE's two-window cab and used the standard Phase 2 Dash 9 underframe with welded fuel tank and 71" walkway height. However, the overall length was still 73' 8", and the corner steps continued to use four (rather than five) steps below the walkway. The top corners of the short hood were angled slightly differently from a standard Dash 9 unit, allowing for the use of "teardrop" (rather than rectangular) windshields; incidentally, these were not the same as the similar-looking windshields used on the EMD SD60M through SD75I.

Despite the differences from other units, these later orders were known simply as Dash 9-44CW's, and the cab and underframe variations continued through the beginning of CN ES44DC production in 2006.

All BCOL and CN Dash 9 units were built without air conditioning, leaving an open space on the conductor's side walkway behind the cab.

Norfolk Southern was the sole customer for the Dash 9-40C, equipped with a standard cab. Unlike on the Dash 8 series, where the frame height was reduced by more than 5 inches to accommodate the taller wide-nosed cab, the Dash 9-40C used the same frame as other Dash 9 units. To compensate for the higher hood section immediately behind the cab, the nose and cab sub-base were raised compared to the earlier Dash 8-40C, raising the roofline to the same level as the wide-nosed cab. Other spotting features were consistent with Phase 1e units.

Externally, all Dash 9-40CW's shared the main spotting features of Phase 2a and later Dash 9-44CW production. Although there was remarkably little variation over NS Dash 9-40CW production, a whole series of very minor detail changes nonetheless resulted in almost 20 visually distinct variations (not including internal changes). I drew 13 variations in 1:36, but after discovering a few more staggered changes, I have elected to separate the 1:18 drawings into 17 variations, representing the detail changes summarized below.

For clarity, phase details that apply to Dash 9 production as a whole are repeated in this table and are highlighted in red.