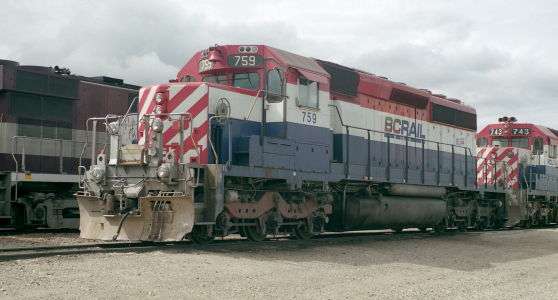 For the development of the US-built EMD SD40-2 and relevant phases, see the EMD SD40-2 phases.

The transition from the GMD SD40 to the SD40-2 was generally the same as for their EMD counterparts. Most of the phase changes occurred at the same time as in EMD SD40-2 production, although a few minor changes occurred later.

Some of the features generally associated with GMD locomotive production (such as vertical corner steps and nose-mounted headlights) were more a question of railroad specifications than of differences from EMD. When GMD built several orders of SD40-2's for BN while EMD was at capacity, they were virtually identical to their US-built counterparts. Likewise, when EMD built an order of early CP SD40-2's, they were built to GMD/CP specs.

These phases are based on my own observations in combination with sources I used for US-built SD40-2 phases.

The SD40-2(W) followed some of the same detail changes as the GMD SD40-2. However, it was not affected by changes specific to the standard cab, such as the side panel around the windows, cab sub-base, battery box covers or the length of the short hood. It also retained wire mesh radiator intakes significantly later before adopting corrugated intakes. As CN was the only buyer, there were no railroad-specific variations.