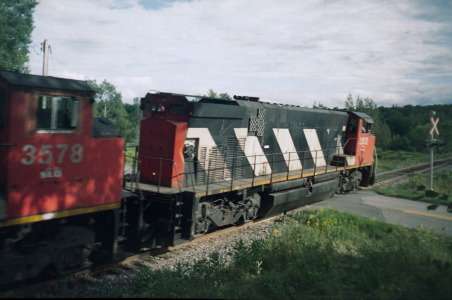 Welcome to the photos page! This is a collection of photos that I have been building since 1999.

Most photos on this site are my own, and they are freely available for non-commercial use. If you would like to share them elsewhere, please provide credit in some way, such as my name and/or the URL of the Trainiax site.

In September 2022 I took possession of a collection of hundreds of photo prints from local railfan George Matheson. As these photos would otherwise have remained hidden, I decided to incorporate them into this site with credit given to Mr. Matheson. This is the first time I have posted any photos other than my own.

By Reporting Mark
By Equipment Type
By Photo Date

Canon EOS Digital Rebel XTi (2007-11-09 onwards)
Also known as the EOS 400D, this 10.1 megapixel digital SLR became my new all-purpose camera on November 9, 2007, and I have used it exclusively ever since. I had previously refrained from adopting digital because of the shutter lag, slow response time and questionable colours I often experienced with point-and-shoot digital cameras.  However, this camera retains most of the features that I so enjoyed with my Chinon SLR film camera (reaction time, colour accuracy, SLR design) along with greater image sharpness and much more versatility.

The 18-55 mm kit lens that came with camera (29-88 mm 35mm equivalent) didn't exploit the camera's full potential.  In 2010 I purchased Canon's companion 55-250 mm IS lens for zoom shots, which is better than the non-IS kit lens, and in 2015 I finally replaced the original 18-55 with an optically superior IS version of the same lens. The vast majority of photos on this site have been taken with this camera.

Although I've been pondering a camera upgrade for several years (the XTi is now many generations out of date) the improvement in image quality with a newer camera is still not big enough for me to justify the expense.

Ansco Vision Mini-MAF (Motorized Auto Flash) (1999 to 2003-04)
For many years, I used my first and only camera for train picture-taking, an Ansco Vision Mini-MAF that had no additional lenses or attachments.  Almost all photos posted on the site before May 2003 were taken with this camera, which was a childhood Christmas present from 1993.  Although picture quality was about on par with a disposable camera, it survived many hardships and was very simple to use.

Chinon Genesis GS-7 Reflex Zoom (2003-05-03 to 2007-10)
This was an automatic SLR camera from the early 1990s. I bought it from a school teacher in May 2003 and immediately took a great liking to it. With a 35-80 mm lens, infra-red autofocusing and a number of other features, it was a huge step forward from the Ansco camera. It served me marvelously for many hundreds of photos, with fast reaction time, accurate focus, correct exposure, 1 photo per second capability and solid construction. I bought a 1.3X teleconverter in 2006, which I used for a few telephoto shots. However, by 2007, as I began to take huge numbers of photos, film and development became too expensive and scanning and dust correction became a major hassle. This resulted in my conversion entirely to digital.

Up to 2007, all my digital-camera experience came from cameras owned by friends or family. It wasn't until I saw photos online from a Canon Digital Rebel XT that I was convinced the photo quality was sufficient for me to make the transition from film.

Canon Powershot S45 (2005-2006)
My first real experience with digital photography was with this camera, vintage-2003, which my parents owned. It was a 4.0 megapixel camera that I sometimes borrowed for photos at Exporail and in the MMA Sherbrooke yard. It was a very good camera for its time, producing images with a "smooth" appearance and good colours. It was fairly versatile, although it had a limited ISO range and was not particularly fast. The camera's downfall was a failure of the lens cover--a ridiculously complex sliding design that also acted as a power switch.

Sony Cybershot DCS-W50 (2006-2007)
I occasionally borrowed this camera (my parents' replacement for the Powershot S45) mainly when I wanted to take numerous detail photos and/or didn't have my Chinon film camera handy. It was a solidly built pocket-sized 6.0 megapixel camera with generally good image quality and decent reaction time. It had somewhat less flexibility than the Powershot S45 and a limited useful ISO range. I used it while railfanning the SLR and MMA until I bought the Canon XTi.

Kyocera Samurai X3.0 (2002-07-15 and 16)
This was an unusual motorized SLR half-frame camera that was my parents' primary camera before the Canon Powershot S45. It had a built-in zoom lens and was capable of producing very good photos. However, double-sized film grain and a terribly indecisive autofocus system made it useless for photos of moving trains. I experimented with it for just a couple of days in the middle of July 2002. No photos from this camera were posted online until 20 years later, in 2022, when I decided to add them after finding the film and scanning the other pictures on it.

Olympus OM-1 (2003-03-28)
I borrowed this camera to take pictures of the March 28, 2003 SLQ derailment in Lennoxville, QC, since I wanted better quality than what my old Ansco camera could offer. It was a top-notch all-manual film camera that still worked flawlessly at 30 years of age. The results convinced me to get a better camera of my own, which happened a month later with the Chinon GS-7.

Kodak Easyshare C533 (2007-01-14)
I was invited to try this 5.0 megapixel camera by a friend, and I used it for some photos in the MMA Sherbrooke yard in January 2007. It left me unimpressed. It had middling reaction time and flexibility, and settings were reset every time the camera was turned off. Images suffered from purple fringing, grain and colour casts so odd that they could not be corrected.

HP Scanjet 5100C Flatbed Scanner
Up to 2003, prints were scanned with an HP Scanjet 5100C. It was a good scanner for its time, but the outdated parallel port on the back has long since relegated it to retirement. Very dark areas tended to get a blue cast. There might still be one or two old scans floating around on the site that were made with this scanner (for which the negatives were damaged).

HP S20 Film Scanner
In July 2003, I purchased an HP S20 to scan the negatives, to take advantage of much-improved image quality from the Chinon GS-7 camera. In the following years all previous photos were rescanned with this scanner, which proved highly satisfactory and reliable. Colour balance, contrast and shading were generally accurate, and the software was easy to use (although somewhat restricted in fine-tuning the exposure). The scanner did produce some noise in dark areas, which is why shadow detail tended to be better with negative film than with slide film. As of 2021 the scanner was still functional for film, but had stopped accepting framed slides. With a replacement scanner arriving in 2020, and with the S20 requiring Windows XP to function, I finally disposed of both the scanner and the associated XP computer in 2022.

Epson V600 Flatbed / Film Scanner
In 2020 the V600 replaced the S20, entering use both as a film scanner and (later, with George Matheson photos) as a print scanner. While 2400 DPI film scans are ever so slightly less sharp than with the S20, the colour and exposure management with the scanning software is vastly superior, offering proper histograms to set the black and white points and RGB channel levels. For most film types, there wasn't an appreciable difference over the S20 to warrant rescanning, especially with slight film fading in the intervening years. The exception was Fuji Superia 100 film I used in 2004, which always had an unnatural colour cast in previous scans (unlike the Fuji Reala film I used later). Results were so much better with the new scanner that I decided to re-scan all photos I had taken using that film.

The Eternal Debate: Film vs. Digital

At one point, I was firmly convinced of the superiority of 35mm film over digital. I resisted converting to a digital camera right up to 2007, since none of the digital cameras I had tried could offer the performance and consistency that I was obtaining with 35mm film and the Chinon GS-7 camera. Chief among my concerns were the slower response times, questionable colours and limited dynamic range I had experienced with early digital cameras. With full-resolution scans of good 35mm film, I was getting clarity similar to a 6 or 8 megapixel digital image, which at the time was beyond the range of consumer cameras.

Then I discovered the digital SLR—and in particular, the Canon Digital Rebel series.

Forget theoretical charts of colour depth and line resolution that attempt to prove the merits of 35mm. After visually comparing hundreds of online photos from a Canon Digital Rebel XT to my own 35mm film scans, I concluded that the image quality—the sharpness, the colour accuracy, the absence of grain—substantially exceeded what I could obtain with 35mm, including films much better than what I was using. I arrived at this conclusion very reluctantly, but it was the last hurdle in the face of digital's other major advantages in terms of cost, time and flexibility. The one noteworthy weakness of digital compared to film is in dynamic range, where film is very forgiving (as I discovered with highly over-exposed photos from my earliest film camera).

So I converted entirely to digital, with a new Canon Digital Rebel XTi. By 2020, the XTi had surpassed 30,000 photos total—with a large portion of them being train photos posted on this site. The equivalent film and development costs would have been astronomical. Sadly, the Chinon GS-7, a fantastic camera that still works perfectly, hasn't taken any photos since.

The standard film I used from 1993 to 2004 was Kodak MAX 400. Starting in 2004, I experimented with other films after the Chinon camera and the HP film scanner revealed the grain of Kodak MAX 400. My final choice (from 2005 to late 2007) was Fujicolor Superia Reala 100, after which point I converted to digital.

For scanning film and prints, I used the software that was provided with the HP S20 and Epson V600 scanners.