The EMD two-axle, clasp-brake freight truck saw its introduction on the EMD FT of 1939, and was derived from a similar A-1-A design used under passenger E-units. The truck is commonly known as the "Blomberg" truck, after designer Martin Blomberg, who also designed the "Type A" switcher truck. The Blomberg truck had a coil spring primary suspension above the axle bearings, a leaf spring secondary suspension between the axles, and a swing hanger between the secondary suspension and the truck frame to allow for some lateral movement. Clasp brakes were actuated by two brake cylinders per side, located roughly above the axles.

Relatively few changes occurred during the more than thirty years between the introduction of the original Blomberg truck and the introduction of the single-shoe "M" type Blomberg. Minor changes to the brake rigging during F-unit production and again in the 1950s did not result in major visual changes. Later versions (after 1954) lacked the square wear plates mounted under the arch of the truck frame next to the inboard brake arms1.

Several types of wheel bearings have appeared on Blomberg trucks. Most were built with oil-lubricated Hyatt roller bearings, which had cylindrical rollers. The axles were held in place laterally by rubber blocks inside the end caps, which did not rotate. Very early bearings used a larger, boxier housing with springs inside the end caps to center the axles2. Later trucks were built with sealed/greased Timken bearings, which used tapered rollers that eliminated the need for end thrust on the axles from the end caps. On these bearings, the end caps rotated and were tightened to apply the correct load to the bearings3. Some older trucks received newer bearing designs as replacements.

The biggest change in the truck's design came with the introduction of a single-shoe version of the truck (the "Blomberg M") at the start of the Dash-2 series in 1972. Blomberg M trucks featured single brake shoes actuated by one brake cylinder on the left side of the truck frame, with a bar passing under the middle of the truck frame to connect the two brake shoes. To equalize brake forces, the two shoes were mounted at different heights. The swing hangers were made shorter and the central leaf springs were replaced by a shorter stack of rubber pads, which allowed room for the new brake system and also stiffened the secondary suspension (thereby improving adhesion). The right axle had a vertical shock strut extending to the truck frame. New castings of this truck also lacked the outer brake beam supports and had a larger gap between the axle and the bottom tie bar. The safety strap (the V-shaped piece under the main swing hanger) was supported at the top by a 180-degree pinch rather than a rectangular block.

Some F40PH and GP40X units also received Blomberg M trucks with a different rubber secondary suspension. Instead of a simple vertical stack of rubber pads, a pair of chevron-shaped rubber pad sets were oriented sideways, supported at the outside edges by a flat rectangular block. The revised secondary suspension and bolster required the use of the taller swing hanger design from the clasp-brake Blomberg truck4. This design may have been intended to soften the vertical ride, which was stiffer with the rubber pads than with the original leaf springs.

In the 1980s, Blomberg M trucks gradually received Timken tapered roller bearings, new brake beam guides, and a new, smaller central leaf spring designed to fit within the secondary suspension system (possibly to restore the ride quality of the original clasp-brake version). Late versions of the truck cast for GP60 variants had a much wider horizontal rib in the truck frame above the axles. While some sources call these later trucks a "Phase II" Blomberg M, the changes happened gradually, not all at once—and some railroads retained the older Hyatt style bearings. Regardless of railfan terms, EMD classifies all Blomberg M variations as the "2-axle rigid single shoe" truck, with a couple of minor subclasses depending on suspension and features.

Below is an illustration of the foundries that cast Blomberg trucks, to the best of my knowledge. As the truck is a very long-running design, some of the information I've listed relies on personal observation of shapes and casting logos (I welcome any corrections or additions).

For much of first-generation locomotive production, EMD relied heavily on Locomotive Finished Materials (LFM) for truck castings. These trucks can easily be identified by the "L.F.M." cast in the upper left corner of the truck frame. Although LFM was purchased by Rockwell in the 1950s, many later locomotives (up to the 1990s) continued to be built with traded-in LFM castings.

Compared to later castings, LFM Blomberg truck frames have narrow outer journal guides with a notch at the bottom (1); inspection holes looking into the spring assembly (2); a nearly symmetrical, arch-shaped rib above the springs (3); and end transoms with a C-shaped cross section giving a rounded bottom (4). The bottom of the inner journal guides are either a straight line (illustrated) or a notch similar to the outer guides.

The earliest Blomberg trucks used a different roller bearing housing, with variations in the combination (1) and plain (2) housings.

As an aside, the LFM clasp-brake Blomberg truck is the version so famously captured in HO scale by Athearn. Other than a few minor compromises (widened brake shoe spacing to clear the wheels and slightly taller swing hangers to facilitate installation) the Athearn rendition is a stunningly accurate replica of the Blomberg truck cast by LFM, complete with the LFM logo. 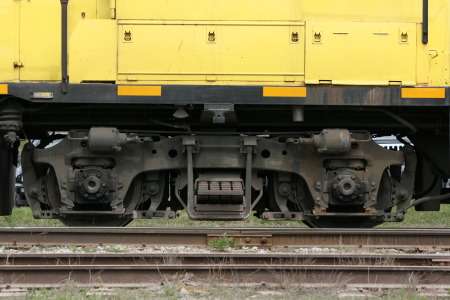 Many EMD Dash-2 (and later) units were built with Blomberg M trucks cast by LFM. However, as LFM had long since been taken over by Rockwell, these were older, trade-in truck frames that were remanufactured with new components. Compared to newly cast Blomberg M trucks, LFM castings often retained the outer brake beam supports (1) and narrow gap between the bottom tie bar and wheel bearing typical of clasp-brake Blombergs (2), although in the latter case shim plates were sometimes welded into place to lower the bottom tie bar. Note also the safety strap with a 180-degree fold at the top rather than a rectangular block (3) and end transoms with a rounded bottom (4).

During GP60 production, a few LFM frames were further modified with the outer brake supports cut off and wider ribs welded above the springs (similar to newly cast trucks), with the ribs partly covering the LFM logo.

In 1956, LFM was purchased by the Rockwell Manufacturing Company5. Locomotives built into the 1960s continued to use trucks with the old LFM logo and casting pattern, although many (or all) of these trucks may have been from trade-ins. At some point, new truck castings were changed to have the Rockwell "r" logo at the left-center of the truck frame and the EMD logo in the center.

The Blomberg truck frame was changed slightly when the Rockwell logo appeared: the outer journal guides were widened, with a slight jog at the bottom (1); the inner journal guides were narrowed, with a steeper curve into the arch and also with a slight jog at the bottom (2); the rib above the springs was a different shape (4); and the end transoms were changed to an H-shaped cross-section, resulting in two visible ribs along the bottom (5)6. Most castings also lack inspection holes looking into the springs (3), although early Rockwell castings appear to have retained them for some time. The sand brackets were also changed to go under (rather than through) the brake beams (6) although this may have occured earlier.

Compared to earlier Blombergs, Rockwell Blomberg M truck frames (with either logo) lack the outer brake arm supports (1) and have a larger gap between the bottom tie bar and the wheel bearing (2). The H-shaped end transoms are also more readily visible in the M truck (3).

The last version of the truck cast by Rockwell (seen on GP60 units) had both the Rockwell logo and "GM GP" cast in the middle of the truck frame. The bolt holes for the right-side brake cylinder were removed, leaving only the attachments necessary for the shock strut (1). GP60-series units also had additional shock strut on the right side of the locomotive between the truck frame and the locomotive underframe (2). Trucks on later GP60 units had a wide rib above the axles (3); this rib was also welded on to a few traded-in LFM truck frames. Note also the brake beam guides and leaf spring secondary suspension. As the brake beam guides could support the brake assembly at either end, there was no longer a support bracket under the swing hanger (4).

Locomotives built by EMD's Canadian subsidiary, General Motors Diesel (GMD), rode on trucks cast in Canada by Dofasco (Dominion Foundries and Steel Company). Blomberg trucks cast by Dofasco are most easily identified by the "Dofasco" logo cast into the truck frame (script on earlier trucks, block letters on later ones). Aside from the logo, Dofasco Blomberg trucks had a shape somewhere between LFM and Rockwell castings, with wider outer journal guides (1) as well as wide inner journal guides (2), both with a vertical section at the bottom. The journal wear plates had a straight vertical ridge behind them (3); there were inspection holes cast near the springs (4); and the rib above the springs widened at the edges (5). The end transoms had a C-shaped cross-section on early trucks and had an H cross-section (6) on later ones. Earlier Blomberg M trucks cast by Dofasco retained the outer brake lever supports.

There was very little variation in the shape of Blomberg trucks cast by Dofasco over the years. Clasp-brake Blombergs cast by Dofasco had a few slight differences from later ones, such as a ridge around the spring inspection holes (1); a more pronounced edge on the top of the rib above the springs (2); and, as on Rockwell trucks, a narrower gap between the axle and bottom tie bar on the clasp-brake Blomberg than on the M version (3). The version below also has later H-shaped end transoms.

GSC also cast a few Blomberg trucks for EMD, although apparently not as many as LFM/Rockwell or Dofasco. Trucks cast by GSC had the company's crest-shaped "G" logo, generally at the left edge of the frame, with C cross-section end transoms and an overall shape similar to trucks cast by Dofasco. Blomberg M trucks cast by GSC appear to be remanufactured from older units since (like LFM) GSC was not present for most of the Dash-2 era. 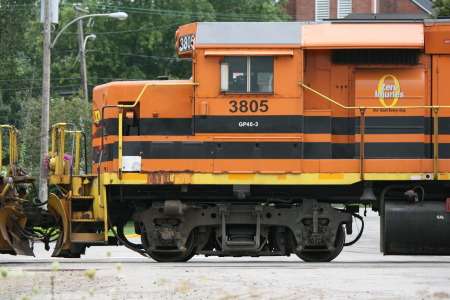